I've been a fan of comics a long time.  Probably way too long.  Whenever I hear the name "Aquaman", I get the following thoughts... 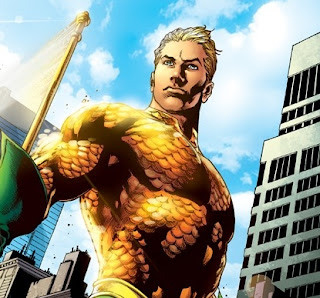 When Aquaman #1 came out, the writer/artist combo of Geoff Johns and Iva Reis, I had to take a look.  Geoff Johns was the person responsible for bringing Green Lantern out of the proverbial toilet by bringing Hal Jordan back from the dead.  Ivan Reis' artwork is simply amazing, and I can look at a drawing of a wall with a freshly open can of paint on it, and if it was drawn by Reis, I will make it a desktop background for awhile.
In this issue, it is addressed that Aquaman is clearly the Rodney Dangerfield of super-heroes, and I was just waiting for him to snap, especially when he was asked "How's it feel to be nobody's favorite super-hero?"

This issue was entirely bad-ass, and I give it 5 out of 5 fish heads.

Now that the new 52 comics have come out from DC, these are my favorites, in no particular order...

DC really hit a home run, and despite my initial reservations, I am excited about the new launch.  Other cool news?  The new line sold out, and books like Justice League have sold so well, they are on their 4th printing.  Pretty impressive.  What's next?  Sustain the quality.  It sounds simple, I know.  However, in a field like comics, especially in today's economy/competing mediums (video games, for one), I think it's important to keep your target audience at top of mind.
You can't fall back into the trap of yearly company crossovers that are so amazingly widespread that readers feel they have to get every single issue to know what in the hell is going on.  Look at Blackest Night.  While I would call it a success, an insanely bigger success than Infinite Crisis, it's easy to get overwhelmed with 30-50 books a month all crossing over.  At the comic shop I visit, I heard people discuss how they just said "screw it" and dropped the storyline, and some dropping DC altogether.

Please please keep the quality intact, as I'd hate to see comics become a dying medium, as some argue it is becoming.  DC has an excellent opportunity here, and I hope they continue to capitalize.
Posted by Steve at 10/01/2011

Agree 100%. DC has successfully converted this Marvelite and I hope they keep it up as well. The way they're going, if they decided to re-launch the Wonder Twins, I'd give it a chance.

If Geoff John's wrote them, I'd buy it for sure.