Why Is This Character Cool? 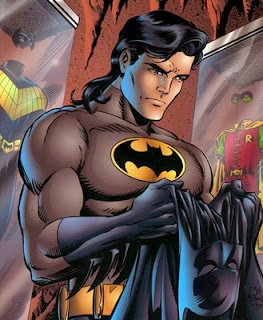 
Mr. Grayson made his first appearance a short 69 years ago in 1940. The comic was Detective Comics #38. He was created by Bob Kane, Bill Finger, and Jerry Robinson...three names that shouldn't need any introduction.

He is arguably the most famous sidekick in comic books, and survived the Golden, Silver, and Modern Age of comics.

Dick Grayson was part of "The Flying Graysons" circus act, and watched his parents die in an "accident". There have been almost 732,000 revisions to this origin tale, but that's it in a nutshell, Bruce Wayne was in attendance, that night, was reminded of his own tragedy, and takes Dick under his wing. I felt a little weird typing "takes Dick under his wing".

In 1984, Grayson gave up his role as Robin and became his own hero, Nightwing. Up until recently, he remained his affiliation with the Bat-verse, and was a founder of the Teen Titans, and has been associated with the various incarnations of that team since then, as well.

He has taken the Batman mantle now twice, and is very respected by the rest of the DCU. Grayson was the light that kept Batman from potentially crossing the line, and has always been an extremely entertaining character to read.

As the new Batman, he also has a new Robin to deal with, a new Robin who I personally think is so irritating it makes me want to perform an autopsy on myself (not possible, I know). There is so much that this character has done in almost 70 years, that a measly blog cannot give him his just write-up. Great character, one of the premier fighters in the DCU, and a great example of someone growing out of Bruce Wayne's shadow.
Posted by Steve at 11/30/2009

Dick Grayson has always been one of my favorite characters next to Bruce Wayne.

in my eyes he will always be the BEST Robin, and did a GREAT job as Batman.

i'm really glad to see him back as Nightwing!