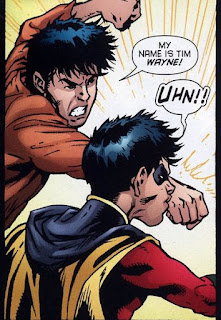 Although I agree Tim was awesome in the part, I normally avoid anything with the character who I cleverly refer to as "that little jerk in the yellow outfit". I may have to pick this one up, though.

I liked Tim as Robin because he wasn't a dillhole. If they launch a solo Robin title with Damien "please Joker, pummel me with a blunt object" Wayne, then I will send the Batman editors a picture of me every week without a shirt on until they right their wrongs.

No one wants that.