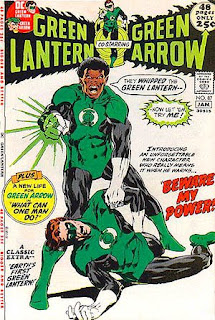 This is some fun dumpster diving. I was 2 and a half years old when this came out. I was getting the chicks even back then, I'll tell you. No one...filled out his diaper...like me. Put your house on it.

So what the hell are we even talking about here? Oh yeah! GL #87. The first appearance of John Stewart. I dug this out the other day to give me an excuse to blog.

This comes to us directly from the legends: Denny O'Neil pens the story, and Neal Adams and Dick Giordano give us the art. Neal Adams...this guy will go down as one of the all-time greats, bar none. I have some original Mike Grell artwork, and he is very Adams-like in his greatness.

So we open up to a great splash page of Hal Jordan charging his ring, right as an earthquake hits. Hal goes out to lend a hand, and runs into Guy Gardner (after a bus runs into Guy). During this time in DC continuity, Guy was the alternate choice to be GL...I dunno, if Hal was at a dentist appointment or something.

Because of Guy's accident during the quake, he is bed-ridden for at least 6 months. Hal is disappointed, as he was hoping for Guy to relieve him while got his personal life together. Hard segue to the Guardians interrupting Hal worried about his successor to tell Hal that they've...oh yeah, found a new successor. Convenience for $1,000, Alex! The comic actually reads "Who indeed have the Guardians chosen? To find the answer, come with us to a certain urban ghetto..." 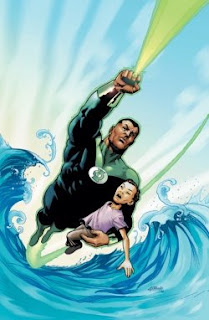 ind that GL was all about social relevance in this time period. We meet John Stewart sticking up for some dudes playing dominoes, giving a cop some grief...all witnessed by Hal and a guardian. Hal thinks the decision is a mistake, not because Stewart is black, but because he has a chip on his shoulder. We then see Hal trying to convince John to be his replacement/backup....IN A CANDY STORE. John even says "Only from now on, maybe you better call me...BLACK LANTERN!" John must be a pre-cog, and knows of the Black Lanterns set to plague the DC Universe this summer.

No mention of his military past, as that is a little newer in the ol' continuity, but, considering its time, a fun story. Awesome Green Arrow backstory, coupled with a GL classic from the late 50's/early 60's.

Not taking the fact that this story is pretty dated, I will give it a 4 out of 5 star rating. If it was released today, there'd be a lot of confusion, and it would probably be on CNN.
Posted by Steve at 5/12/2009