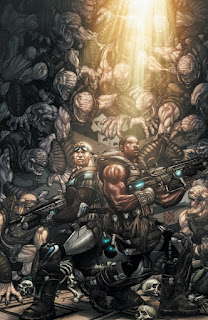 
Gears of War is an amazing video game. Same for Gears of War 2. The gameplay, story, visuals...ahhh, it's just simply awesome. So when I heard about the Gears comic, I was excited!

Gears of War is a Wildstorm comic brought to us by writer Joshua Ortega and artist Liam Sharp. Before we look at what is shakin' with Marcus Fenix and company, I will say the art is quite good. Sometimes with video game or movie/tv adaptations, I have found the art to be stiff...as if the artists were just copying an old photo James T. Kirk onto paper. Not so here. Liam Sharp draws some cool grubs! Mr. Sharp has an interesting background.


The story kicks in 15 years after E-Day and two months after the lightmass bombing. If you read that and have no idea what the hell any of that really means, then go out and buy an Xbox 360 and pick up the games. Play through them, then read these comics.

We are following a new Gear, Jace around as he and Gil are two newbies in Delta Squad. The series dives right into the action and, if you've played the game, you feel like you just completed some of the levels as you read along. This series has great action, and decent character development. My biggest complaint is it's a quick read. That's just me, though. The art is so good, I have flipped through the issues several times to take more of it in. Jace, the new guy, gets some creativity points for landing the helicopter the way he did in issue 3. Also in issue 3, the name of the settlement they run into was amusing.

Cole is Cole, and Ortega does a nice job with him. Baird is an a-hole worse in the comic than in the game. The jury's out on that right now. Issue #6 wraps up this story arc, so we'll follow up.

I would recommend this series to a fan of the game. It's fun, and as I said has good action. The story isn't life-altering, and is a touch predictable. 4 out of 5 stars. Visually, this book is great. 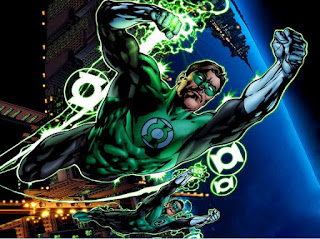 Next up: a recap of Green Lantern! Heading into Blackest Night, Hal Jordan and his fellow Lanterns are going to be put through the wringer. We've got Blue Lanterns, Orange Lanterns, the Sinestro Corps (yellow), Red Lanterns, The Star Sapphires...craziness! Actually, I was a little apprehensive when I heard of all these different colors. First off, I hate Skittles, secondly, I have to admit Geoff Johns has really pulled it off. More next time!
Posted by Steve at 4/09/2009

The Gears comic looks great, but I missed the first few so I'll wait for the trade paperback. I did pick up the newest GL, though.
Art - Awesome!
Characters - cool
Action / writing in that issue - Great
Overall story or "Big Picture" - Haven't got an f'ing clue.

That's just me being a newbie, though. I didn't even know there was a Skittles Patrol apart from the Green guys.

Hahahaha, "Skittles patrol". I love it. If you can, a great place to start with GL is the trade paperback Green Lantern: Rebirth.