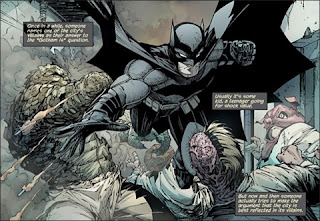 There are several great comics to get to from this week, but today, we will look at Batman #1.  If you've been living under a rock (spoilers), there is a new Batman #1 available for purchase.
Scott Snyder does the words and Greg Capullo the doodles.  I really enjoy Capullo's work.  His work on Spawn alone is just amazing and brings a creepy vibe with him.  I don't know much about Snyder, which is to say I don't know anything about him at all.  I think I could Google him and lean more, but come on.

The art with Batman and Harvey investigating a crime scene is so excellent, it made me want to buy the original pencils and cry on them.  Good story, and I am interested to see what the deal is with Dick Grayson is in this story.  Speaking of Grayson, Nightwing came out as well this week, and I was very happy with that!  It's about time he is "his own man" again.

Future posts will take a peek at Green Lantern Corps, Catwoman, and Red Hood and the Outlaws.
Posted by Steve at 9/25/2011 No comments:

Green Lantern #1. Whoo! How was that for a detailed review?

Okie dokie, pot smokie...here we go. As you might gather from the cover, Sinestro is our new Green Lantern. Oh yeah, possible spoilers lie ahead. If you are like me (and pray that you aren't), you were wondering how Hal Jordan will fit into the new book now that he has been stripped of his power ring. He shares space with Sinestro in the book, 11 pages to 11.

Hal jumping off of his building to answer a distress call was freaking great.

This was an excellent, excellent first issue.

The Guardians are little bastards, and I am interested in seeing them get a little payback/grief from Hal and/or Sinestro.

Grifter #1 features Cole Cash being driven insane and jumping from a plane. The rhyme in the aforementioned sentence was not purposeful. Stay with me here.

Grifter has such a cool look about him when he is in costume, but this is the 2nd or 3rd character I've seen from DC in this relaunch with Wolverine's sideburns. Seriously. Knock that shit off.

Good issue here, but not one that had me hooked in too deeply. I don't mind waiting for the story to develop and learn as I go, on the contrary, I think that is what a good story should do. However, Grifter, like some of the Image comics from whence he came, throw you in and sometimes I feel like I should know more than I do.

I will stick with this for the first storyline and see where it goes. Trust me, it's not bad at all, and nowhere near the level of the Spawn/WildC.A.T.S. mini-series that left me questioning my purpose on this planet.

The last one I will tackle tonight is Batman and Robin #1. I will start by saying this: I have a daughter. I would never, ever hit her. When I set this book down, I wanted Batman to smack Robin in the mouth. Hard. Hard enough to possibly shake the kids brain back to where it should be. 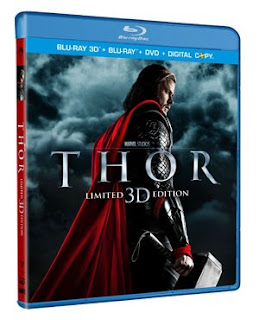 The last scene with Sinestro? WOW. Loved it. Anyway, this comes out on DVD next month, and I will be there. Enthusiastically. Screw you critics! :)
Posted by Steve at 9/14/2011 1 comment:

Is this thing on? 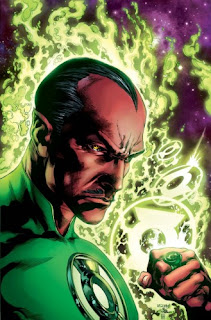 Well, THAT was an experience. Sitting in a jail since last April for crimes I did not commit was a bunch of crap, let me tell you. It all started when I was driving down the interstate. As I came over the hill, a roadblock consisting of military vehicles were waiting for me. In an effort to escape, I...all right, screw it. I'm lazy. Blog-lazy, that is. Increased travel at work, comics stacking up and not being read, as well as other excuses that start with an "x" and end with a "box" come into play.

This, however, is a fun time to come back. DC Comics has relaunched their entire line with a slew of new titles. Before we continue, let's address the following...

"But but but but Action Comics #1? Re-numbering Action comics is sacrilege! It's an outrage! I will never throw another cent at DC! My undying need to express my negativity is surpassed only by emo kids! DIE DC!!"

Anyway, to those people I say good riddance, and try to look at the bright side. Of anything.

So far, I've read these titles:

I have to say, I have not been disappointed with any of these books. Justice League, Detective, and Action Comics were probably my favorites. The highlights were easily Green Lantern and Batman's interaction in Justice League, Superman's "year one" approach in Action Comics, and the portrayal of the Joker in Detective Comics.

Next week is going to be awesome: Green Lantern! Look out, though...the Green Lantern is not Hal Jordan, it's Sinestro. Spoiler space in the sentence before this one. As a lifelong Hal Jordan fan, he better be back in green tights soon! Still, I am very excited to see how Sinestro plays into everything, and why the Guardians could not remove the green ring from his finger. Cool $#!+!!

Lots of great stuff. I would like to get them all, but Marvel is creeping its way into my collection...screw you Thor and Captain America and your awesome stories!!!!!

To the negative people out there, lighten up. Comics are fun, escapist forms of entertainment. For a few minutes, I set down Action Comics after reading it and asked "What in the F--- was I just reading?" I read it again and decided it was completely awesome, because I got my underwear out of the crack of my ass. Get yours out, too, and have some fun!
Posted by Steve at 9/12/2011 No comments: