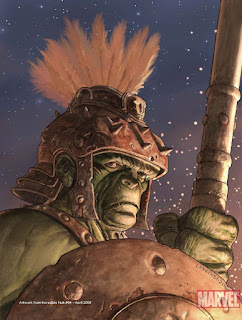 The Hulk. Big green dude, strong, the madder he gets, the stronger he gets. Lou Ferringo, Eric Bana, and Ed Norton.

I literally have thousands upon thousands of comics. Guess how many are Hulk comics? ZERO. Sure, I have stories with the Hulk...some Avengers stuff, random team-up crap, DC/Marvel crossover...but nothing from his own book(s).

I was at the public library the other day, and they have some old trade paperbacks. I read New Avengers #1-4 (trade paperback stories), and thought they were excellent.

I also read the Thor story of Avengers Disassembled. Another great story.

I had seen the hardcover of Planet Hulk, almost as big as the Hulk himself, and kept skipping it, because he's a stupid, green monster. Finally I relented, as to avoid checking out Strangers in Paradise, or some crappy C.S.I. comics.

One thing really irritated me with this story? It ended.

This storyline wasn't "a good read", or "highly entertaining", it was epic. Action, love, hate, betrayal, heroism, humor, and death. Whatever your poison, it was there. The artwork? Fantastic. The writing? Top notch.

The only thing I have to do now is find a TPB of World War Hulk, as that is apparently the next storyline.

If it weren't for Green Lantern, I'd probably divert all my DC money to Marvel. The titles I am enjoying...

If I get sucked into the X-Men universe, there goes the mortgage.

Putting the Hulk anywhere he can punch a tank = Goodness.

Putting him on a planet where he can punch freakin' giant lava monsters and the Silver Surfer? Un-f'ing-believeable!!!