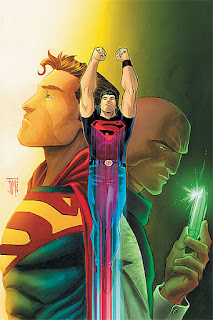 Adventure Comics has quite a history. Starting in 1935 as New Comics, it (according to Wikipedia) started out as a humor series, making the switch to superheroes a few years later.

It ran until 1983, making it, at the time, one of the longest running comics.

The return of this title now features Conner Kent, a.k.a. Superboy. Geoff Johns brings us the story, and Francis Manapul the pictures. Does Geoff Johns sleep?

Now, last I knew, Superboy was dead, and am not sure what the deal is with his reincarnation, and I suppose I could easily find that information. Cripes, get off my jock, people! All right, I'm back. It turns out he was brought back in some sort of time-traveling debacle orchestrated by the Legion of Superheroes, after he died in the Infinite Crisis storyline.

Superboy, or Conner Kent, is cloned from both Lex Luthor and Superman. This plot point factors into the first issue when Conner and Superman visit Lex Luther's old home in Smallville. Now, color me stupid, but I didn't think Lex was really from Smallville, I thought that was a plot device used for the TV show Smallville. Regardless, reading the book was like an episode of Smallville set 15 or 20 years into the future.

Superboy is staying with Ma Kent, helps with chores, has Krypto the superdog as a pet, and has created a checklist in an effort to be more like Superman.

This was actually a pretty good first issue, and I'm glad I picked it up, even though I am left having to look up some of the key points on the interweb machine.

Maybe it's just me, but is being similar to Smallville really a good thing?

Good question...I've never seen a full episode of the show, but the premises seemed similar.

If it turns out to be 90210 with superpowers, I will drop this book, and set fire to the world! MUAHAHAHA!