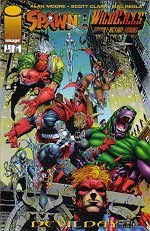 This came out in 1996?? Apparently, so. I must be that behind in some of my reading. Yeesh.

Spawn vs. WildC.A.T.S. comes to us from Alan Moore (the guy who wrote Watchmen) and Scott Clark, who is a pretty good artist!

Remember when Spawn came out? It sold like 600 billion copies because everyone and their mother was into the whole "speculator craze"? I remember it well. I call it the death of all that is good in this world. Okay, that is a huge exaggeration, but I wish that whole 90's fad never happened.

Back to Spawn. I don't know exactly why I stopped reading Spawn, I read and enjoyed probably the first 60 or 70 issues. WildC.A.T.S. was also "okay". I thought the characters were cool with lots of potential, and I just like Jim Lee. Some of the early WildC.A.T.S. stuff is a little convoluted, but Grifter is the man...a very cool character, indeed. So when this 4-issue series came out with Alan Moore at the helm, what could go wrong?

Art-wise, the book is great. I am not sure what Clark is doing these days, but I hope he is still drawing comics, as the art was great. The book is on old school paper, too. It's all gloss nowadays. I was excited to finally sit down to this!!

In regards to the story, Alan Moore, who brilliantly penned Watchmen, had to have sub 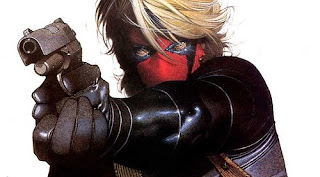 mitted this for no other reason but to eradicate human beings from the face of the earth. The plan had to be that there will be very, very few people on this planet strong enough to survive reading this story, and with them out of the way, Moore will be able to take over the world. I mean, what have we, as a race, done to offend Moore in this manner? Not since the bubonic plague ravaged Europe has man seen such a sickness. Is this what rape feels like? I am not making light of rape, mind you, but I am trying to imagine the worst things possible, and coming to the realization that this story is worse than that.

I couldn't even make it past the first issue. This has torn a hole in my soul, and I am unsure as to what could repair it. If you have read this, hug your loved ones just a little tighter, and know that it only gets better.

Speaking of dumpster diving, I just read an issue of Spider-Man 2099. Apparently, in the future, we will all rollerblade through cyberspace when we "jack on" to the system. Seriously.