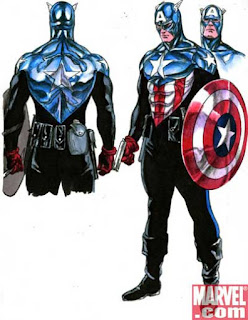 I sporadically read Captain America over the last 10 years or so, as he was one of my faves as a kid. Steve Rogers was much like Clark Kent, in that he was the quintessential good-guy. He was the kind of hero where, if you didn't like him, you had a reason to be guilty.

Well, Steve Rogers is dead. Cap is now his former sidekick, Bucky Barnes. Barnes was the Winter Soldier recently, a brainwashed assassin of sorts. So he has a truckload of baggage picking up the shield.

I am so incredibly surprised in this title. It's got action, romance, drama. Not much for comedy, but it's a very, very well-written book.

If you are looking for an excellent read, great art, and a story that features more than just a Cap knock-off, you have to get this. This is right behind Green Lantern for me in quality. In fact, and I never thought I'd say it, but I hope Steve Rogers stays gone for awhile, as this book is completely riveting. Like Salma Hayek in a string bikini.
Posted by Steve at 5/08/2009