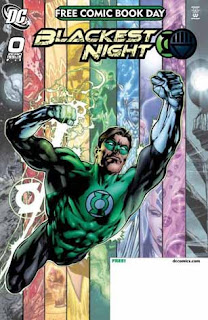 After lots of hype, free comic day has come and gone, and I am reaping all the benefits!! MUAHAHAH!!! I WILL RULE THE...oh. Sorry, I forgot you were still here.

For the 1.5 people that might stumble across this "blog", here is a in-depth review of Blackest Night #0. Did I mention it was free? It was. Free.

Once I get back on track, there will be nothing but spoilers here. So if you have not read Blackest Night, and do not want to be spoiled, then please click here. Otherwise, let's get on with it.

Great cover of Hal Jordan. Behind him are scenes from the color spectrum.

We open with Hal at the grave of Bruce Wayne. Yes, THAT Bruce Wayne. The grave is unmarked, but rests next to Thomas and Martha Wayne. The Flash (Barry Allen), appears on page 4 in an excellent piece of artwork.

Hal and Barry discuss Batman's death. Hal mentions that Robin still thinks Bruce is alive. Barry still thinks of Dick as Robin, which shows you how long he has been gone. Hal corrects him, and informs him Tim Drake is Robin.

Hal then describes the service Barry had after he died compared to his. Barry died a hero, and Hal was, well, infected by Parallax. As Hal says, "My tombstone was desecrated. Not by my enemies. By old allies. I died a sinner. You died a saint." Interesting scene.

Hal further discusses how the world got more dangerous since Barry died. Aquaman died, J'onn J'onzz, and Bruce. Hal and Barry keep going down memory lane, and end up parting company, with a shadowy figure in the background. We see Bruce's grave being dug up by this person, while the Black Lantern oath is printed. We also see the grave of Ralph Dibny (Elongated Man), we see a panel of Hawkman and the Atom, the grave of Ronnie Raymond (Firestorm), and on the last page is Black Hand holding the skull of Bruce Wayne. The last panel shows Scar, the rogue Guardian of the Universe smiling.

The rest of the issue contains a note from writer Geoff Johns, as well as pages describing each lantern group representing the color spectrum. Posted in a prior blog are the Green Lanterns, Sinestro Corps, Red Lanterns, and Agent Orange. This book also contains the Blue Lantern Corps, the Indigo tribe (I know nothing about these dudes yet), the Star Sapphires, and the Black Lantern Corps.

That said, it reminds me of all the death that the characters go through. Superman, Aquaman, Green Arrow, Green Lantern (Hal Jordan), Batman, Flash (Barry Allen). The list goes on and on and on. Everyone is back, or will be coming back. It is difficult for me to appreciate a character coming back from the dead if the story is a hunk of crap. In this case, Geoff Johns sold me on Hal coming back, and hopefully Batman. Batman's death was beyond stupid, so hopefully the return can make things right. That said, get Grant Morrison away from comics altogether so he can quit f'ing things up.

Other free comics I picked up... 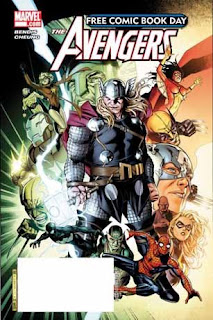 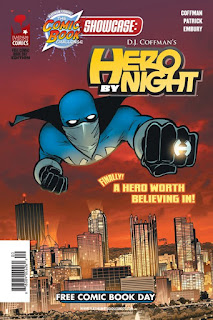 So how did Batman die anyway? Happened right before I got back into comics and I figured it could never top the awesomeness that was Batman's near-miss with Bane. I can still see that spine-cracking splash page in my head. Ahhhh, the 90's.

Batman went through this ridiculous "R.I.P." storyline, and he didn't even die. During some lame story in Final Crisis (I think), he got nailed by Darkseid's Omega beam. Superman holds his somewhat charred remains.